November 11, 2017
Tonight's hunt started like any other hunt, me checking the fields for hogs, maybe walking around the edge of the woods to see if anything was bedded down in the thick brush... a pretty normal night.  That was until I started hearing some Coyote's nearby calling out.  And actually, I need to back up, because when I first walked outside I walked up on a Coyote in my front yard.  Of course, it spooked and darted off as soon as I walked out, but I knew that there was a chance to call him back.  I Proceeded to check the field for hogs and didn't see anything except a bunch of deer, so I started trying to call in a coyote.  Now, I didn't have my electronic caller with me but I've gotten really good at a calling technique called lip squeaking, which is exactly what it sounds like.  I started lip squeaking and had want I thought to be a small coyote come out of the woods.  I continued the call and she kept coming closer...and closer... until she got about 15 yards away.  It was then that I realized that this was not a coyote but actually a fox.  I let the fox run away from me a bit because 15 yards is too close of a shot for me.  I let it get out to about 30 yards before I got the shot was able to recover her not too far away as she tried to run off.  Check out HansETX on YouTube soon for the video.. 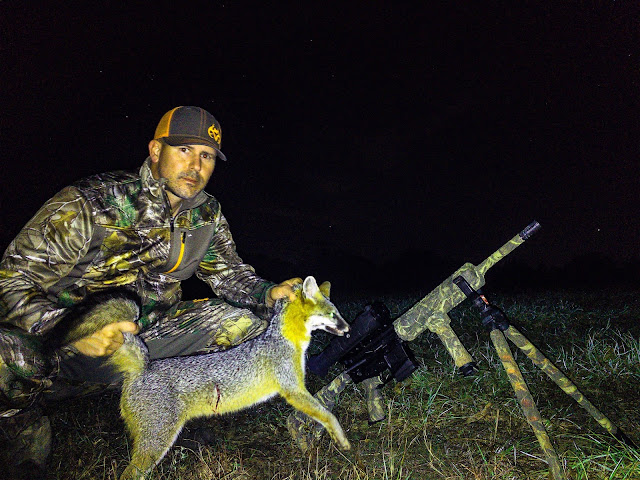 Popular posts from this blog

Full review and comparison of the brand new AGM Adder TS35-384 and Adder TS50-384!  Also, see side-by-side comparisons of the Rattler TS35-384 vs. Adder TS35-384.  July 25th, 2022, was the official launch date for the newest thermal scope from AGM Global Vision.  Hans and Outdoor Legacy Gear were lucky enough to be able to test these units for several weeks before the launch date.   You will see all the specs, thermal video through the optic, and learn about all the functions and features of the brand new Adders!   You can find the AGM Adder’s Here: https://outdoorlegacygear.com/pages/search-results-page?q=adder Call and talk to Hans if you need purchasing advice: 877-350-1818
Read more